kit summers > Still in Oregon
I must apologize, I’ve not kept up with this as I should. Need to return to making it a daily habit to add words. This trip has been fantastic, has added much to my life. I am already thinking about where I want to go next (China or Africa?)
12-22-11, Last night, here in Santa Fe, my sister and I went here:
http://www.tenthousandwaves.com/
She had two free passes so in we went. Very Japanese influenced, a splendid place. There was a men’s dressing section and a women’s. As you go in they want you to shower and clean your body. After showering out the door I went to the outside and the cold–burr. Walking up stairs to an upper level I saw there were various Jacuzzi type pools to go into, one for women only, I went into the one for all. About six people in at the time, men, women and kids. My feet went in and I felt the heat, about 120 degrees. Slowly I got my legs in, it was quite hot. My mid-section was difficult, but eventually . . .  Then I went all the way in to my neck as I got used to it. There were people with swimsuits on and people with nothing on (and, yes we didn’t–but, didn’t what?)  As I was sitting there it was interesting to look out and see snow on the ground while in this hot water. Then it got too hot, had to sit out in the cold weather for a time–then back in to the heat–back and forth. My sister Kaylaa did the same.
I was surprised, in the heat of the pool I could move my joints like I haven’t been able to do for a while. I stretched my legs, felt good. My arms were next, I was surprised at what I could do. Makes me want to start daily stretching and moving to help myself improve. This must become a habit. How about you, would you join me and make this stretching and moving a daily habit?
Then we saw there was a wooden steam sauna building. This sauna was twice the temperature of a human (you do the math.) Difficult for me to breath in there, I suffered though. I count six men and women sitting. No one said a word, seemed strange to me. After I couldn’t take it anymore (the heat or the silence?) it was out to the cold I returned.
After a couple hours of this heat, it was time to depart. So, back down the stairs I went. These steps were not situated well, kind of went on a curve, and the lighting was very bad. Not sure if I slipped or miss-stepped, I suddenly fell forward and my face, upper cheek, hit the railing, hard. Then my legs twisted under me as I rolled down five more steps. A man was there who witnessed the incident, he helped me to get to a walkway downstairs, then inside. That was the first time I fell like that, embarrassed and hurt I was. He asked if I was OK and I said yes (but I was not.)  After talking for a short time I went back outside. I stood on one of the pathways, no one around, and just started crying. Not in pain, I was thinking about my future and the changes I have been going through, both physically and mentally. I’ve felt off balance in the past, but never actually fell. The man who first helped me reappeared and comforted me. Then some people from the place came and talked to me. They took me into a back room office and filled out a form about what occurred. Finally my sister showed up. This was very traumatic for me to go through, something that will always be in my thoughts. Come to think of it, my walking has been getting worse, what will happen next?
Although, even in this bad day, I did read this, enjoyed the words:
“If you wear an antennae to a wedding, would the reception be better?” 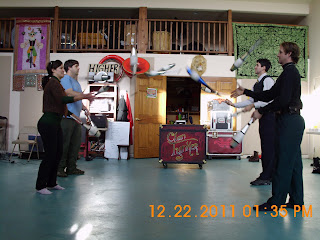 Dec 22–When I arrived in Santa Fe I looked on the internet to see if any jugglers were around.  I found the ClanTynker jugglers. I left a phone message and also sent email. Elijah gave me a call. He knew of me and we agreed to get together. Performing together is the whole family: Elijah, Sam, Rebekah, Adam, and Sarah Whippo along with Rebekah’s boyfriend Matt Connolly, I met with all except Adam and Sarah.  Elijah drove us to his brother’s house way out in the back hills, an exquisite area. Attached to the very nice house is a big room they built to practice juggling and the act, a perfect juggling practice place. I coached them some and gave ideas for advancement of the act, they all seemed to like what I advised.  Here they are, take a look: www.clantynker.com/
And, catch them on Youtube:
http://www.youtube.com/watch?v=zO5qdzKB7vI
Christmas Eve in Santa Fe, everyone goes to this, as Kath and I did:
http://www.youtube.com/watch?v=NrskC4LFAHo
We walked much. But, my left knee was hurting tremendously. In fact, I had to stop a few times to rest it. It was the same pain that has been traveling through my body. The pain comes on sharp, almost makes me want to cry. The city has a great celebration, many people out, would be a wonderful place to do a street show.
After we packed up the rented trailer and her van, it was the long drive from Santa Fe to Bend, Oregon, her new home was awaiting. We left on Christmas Day, traffic was light, of course.  A four hour drive today, we drove to Durango, Colorado. Went to the home of a friend of hers; Heather is a cake chef and prepares an excellent dinner, too. On this trip I have eaten some superb dishes, top pallet pleasers.  I think Heather’s was my favorite so far.
12-30-11–Now to think back to the days after my last posting it is hard to remember well. We arrived at the new home of my sister in Bend, Oregon. I do like her new abode, yet it does need work and improvements. She has two campers and a truck. I drove the truck to the free wifi connection at McDonald’s to use my computer.  Now, over time I have not liked trucks, twice I was hit by trucks and have seen some very bad drivers behind the wheel in trucks. But, I shouldn’t classify all as bad. But, it did feel weird to be behind the wheel in a truck. I helped Kath (whoops, her new name is “Kaylaa”, yet I have always called her Kath, so it is hard to change) with some projects to improve things. She is having fun making discoveries about her new house.
Some photos from our drive from Santa Fe to Bend:

My cousin, Keith, who I’ve not seen since the 1970’s, was in Bend to see a friend of his. Keith looks nothing like I remember of the skinny kid I know from the 70’s. Keith has worked as a supervisor or manager for road and highway building projects and has done quite well in the area. He, like many others I know, has gone through a devastating and difficult divorce. His daughters, who are 12 and 14, are with him, his ex-wife does like liqueur, not good for the kids to be around. Sad to see.

Keith and I met up at my sister’s house and I drove with him up to Vancouver, Washington, he was on his way up to Seattle. I went to see and stay with my cousin, Kristine, who I’ve not seen in an even longer time then Keith. Kristine was ex-familyed (don’t know the correct word, can you tell me?) and has not talked to Keith, or the rest of her family in a long time. After some brief words with his sister, he left me off and continued his drive north.
HAPPY NEW YEAR!! As usual, I slept through the year change, not that exciting for me.
Kristine has been divorced for some time (like so many of us) and has a son who lives with her. She also does a wonderful thing, she has been a foster parent to many kids who have come through her house. Currently she has three kids she is raising. She is strict, yet this is what the kids need and they love her much. She also works full-time selling real estate. So, her plate is often quite full. I taught her son Peter to juggle, which he did quite well at. Along with that, I taught them to make salsa, which they liked much. The time I spent with them for four days was delightful.
My van, my van, had to retrieve my van. As you know from past words, I had left my van off at my sister Sandy’s house. Kris and I met up with Sandy and Tommy halfway and I was transferred to them. These two are not that much older than me, yet I was close to them at age 4 through 8, so, of course, they always seemed quite older. They met and fell in love at a young age, got married in 1964, and have been together since. They raised two successful kids. So, a marriage can work, yes? I enjoyed much my time with this lovely couple.

1-5-12–Good to be back behind the wheel traveling again in my van. North I drove back into Portland. Along the way I went to see Ben again at his juggling store (www.seriousjuggling.com) to let him copy the 600 juggling videos I had with me. The plan was I would meet up with John Cheek, my friend and neighbor from the 60’s. Like so many I have seen lately from my past, I would never recognize him on the street. John and I and his parents talked of memories of the area and the people.


Arriving at the Cheek’s house, they were sitting down to dinner and invited me to join them; the shrimp tasted delicious. As with Sandy and Tommy, their marriage has lasted much time.  Married in 1954, they had 8 kids in 10 years. So, what I am saying, marriage can work, even with seeing all these divorces.  After staying the night I once again stopped by my old house to see what I could remember from when I lived there in the 60’s, not much in memory.

Next, I went over to visit Teresa and her husband Richard.  As I wrote previously, Teresa and I were good friends back when I lived there in the sixties. The pasta dinner they took me out for tasted fantastic, thanks again.
Since it has been so long, I want to get this out to you, so I will stop here. Next I will be starting my drive back east. I want to keep this trip continuing forever, but . . . I must get back and sell my home.