kit summers > Into the Sun
Driving starting in the mornings before the sun is up, have to shade my eyes from the sun. Yes, I am being cautious on the drive east toward the sun.
January 6, 2012–On the way to visit my cousin Karen in Vancouver after leaving Portland, I went to spend one more night with Karen’s sister, Kristine. A brief stay, cleaned my van well. Karen and Kris live just four miles from each other, but the family had a falling out some years ago and these two do not speak to each other, a sad thing. 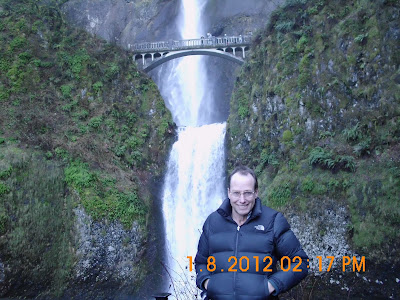 A nice stay with Karen, ate too much though. Her husband Bill took me to visit Multnomah Falls today. I remember going there as a kid. A spectacular site, hope you enjoy the photos. 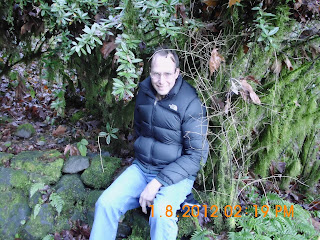 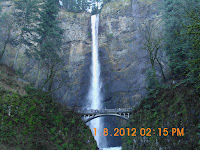 From Vancouver it was on toward Baker, Oregon, which I spent some time at as a youth, I remembered nothing of the town. My older brother, Mike’s, ex-wife, Jody, lives just beyond Baker, spent the night at her house. In the afternoon her daughter Devon came over with her fiancee (that’s a French word meaning—fiancée) We prepared a nice dinner for all and I taught them to juggle, too. Devon and her French Fry liked their new skill.

Here is history about my brothers you may not know. Some years ago my older brother Mike was involved in an auto accident and received a brain injury (I know well how that is.) Then, after that injury, about 15 years ago he was taking a bus from Baker down to Santa Fe to be with my sister. He was not in his right mind and for some reason he got off the bus and started hitch-hiking. He was on a major freeway and it was getting to be night. He was hit by a vehicle and killed. No one knows the circumstances of what he was thinking, but he is gone. The poor man who hit him pulled over and was so upset this happened; a terrible thing to go through–for both of them.

Then, about five years after that, Mike’s only son, Josh, was with my younger brother, Gary, and they were off-roading (driving a truck in the hills that didn’t have a road.) From evidence, beer was flowing and seat-belts were not used, the truck overturned and they were both killed. This must have been awful for Jody to have to go through, first with Mike, then with their son, Josh. So, all of the Summers’ boys have gone through major accidents with vehicles and I am the only one who survived.

In the morning I started driving early, you see, there was a storm on the way coming west to east, so I had to stay ahead of it. I’m glad I left early, I did see snow falling and it could have been treacherous driving. Right now, as usual, I am stopped at a McDonald’s writing to you through their free wifi connection. I have three days to cover about 1200 miles (2092 kilometers), which I could cover in one day, really, so I am taking my time. I was going to travel up to Yellowstone Park, but called and found out they close the park in winter. I spouse I could drive off-road into the park and have lunch with the bears, but, then again. The weather outside is cloudy and cold, not good weather for being a tourist. I will find things to do, you will see.

Yesterday I almost received a virus, my AVG took care of it, though. AVG is such a life-saver, glad I have it, and it’s free. Makes me want to send in money for their fantastic program. What is in the minds of these people who put out these viruses, why the anonymous destruction? What could it do for them? Have to back this up on the Google Docs just to make sure I don’t lose it.

THE PAIN—Have to walk with a limp. My left leg, the one that has pins in the knee, has been hurting tremendously. Centered on the knee joint, the whole leg is hurting. Makes it hard to walk, and stairs are punishing. Come to think of it, my entire body is hurting, perhaps because of the weather. I will have to be examined on my return. And, I had been feeling so good since the surgery, and did nothing to bring this on. I do not understand. Plus, my tinnitus has been greatly annoying me, never hearing silence can be disturbing. But, overall, life is fantastic. 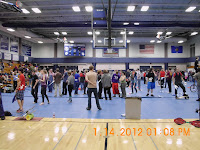 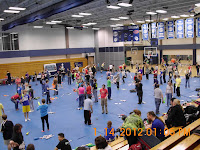 1-13—In Madison, Wisconsin now at MADFEST. Arriving in the afternoon, the juggling convention was to start at 5pm. I thought jugglers would be here early, no one showed up until right at start time. I thought I had the wrong college or the wrong date, had to check twice. Then they started showing up, many jugglers arrived for the opening night juggle. So many young jugglers, most of whom I have not seen before. The skill level was quite high, nothing like at my first conventions. I coached and helped as I could on that first night, as well as sold books. For Friday things run until midnight, so, of course, the guy I am staying with wanted to stay until that time. Having awoken at 3:30am, I am quite tired, yet I will make it. Running a paid workshop tomorrow at 9am on Saturday, should be up to it, I’ll let you know.

This afternoon I told the guy running the show that I had some good materiel together to be in the show (and I did), he said he may not have room and would let me know. He came up later and said the show was already full with acts. I didn’t show it, but I got angry and took it personally. I was thinking that he didn’t want me because I was not any good any more. I’m sure that’s not the case, but . . . I had even told myself, because of this event and because my workshops were not really filling up with people, that I wanted to get away from this juggling scene, thinking I didn’t really belong anymore. Then, as I was walking back to my table, a guy in his 20’s came up to me and said, “Mr. Summers I’ve had your book for years and it has helped me much, I always wanted to meet you. I feel so honored to finally meet you.” So, of course, this made me feel a lot better.

On Saturday night I went to stay with Matti Lehtonen who took my workshop earlier in the day. Matti has lived and worked in the area for some time, yet he travels much. His family lives in China, though they are from Finland. Matti works for GE in the anesthesia division. Talk about a smart man, I loved talking with Matti. He speaks four languages—English, Finish, Manderin Chinese and Cantonese Chinese. We talked for some time about a number of subjects, it is so good to have an intellectual conversation. Matti says that he is going to try and get me over to China to speak for GE—I would love it, of course.

The next night was spent, once again, with my old friend Paul Bachman. Like I have seen so often lately, he has a wife who is quite spunky and does much.

The next day I woke up at 2am and departed—a long drive ahead. I decided to do the last 775 miles (1,247.2416 kilometers) in one day. The drive went quickly, not that I was in a hurry to get back. I wanted to stay out on my trip forever. I am already planning and hoping Matti will be able to set something up in China, I do want to spend time there. Back to “home sweet home”, not so sweet and I would rather be elsewhere. Spent my first day back cleaning up the house and getting things back in order again. I like New Zealand much, the people and the land, perhaps I will end up moving there?

Now that I have returned my focus will be to work on that book (see www.kitsummers.com/bookoutline.htm), along with starting work on my future home (see http://www.youtube.com/watch?v=mYKqnq5uAuU), and I have to sell my house.

I had gotten a call that my lawyer about that 2nd time I got hit by a truck. He had a check for me of settlement. He amount only totaled about $62,000. My lawyer took his 1/3 off the top, which most lawyers do. Of what was left $16,000 had to be returned to the state, who helped pay for my hospital bills at the time. Then there were various costs associated with the case. I ended up with about $24,000, which is not much, knowing that I may never be able to run again and be in pain off and on the rest of my life. But, like I wrote before, money does not really matter in life. We all will find a way to get by and get on with life.

What I am thankful for is that all of this misery I have been through will be aimed at the book I would like to produce. Yes, I know, I keep writing about it, but now that I am back I will make the time. In life, so often people say, “I don’t have the time.” But, we make time for what is important to us in life. I will be developing and making it a daily habit to work on this planned book that will be aimed toward helping people move ahead in their life.

Yes, the end of my trip. But, this blog, this blog will continue. I love making my life an adventure, something we can all do. My adventure will continue, you’ll see (how about you?)

Posted byKit
0
1
Here are many words to read, enjoy.
Still in Oregon