The Circulation event, what a wonderful time

kit summers > The Circulation event, what a wonderful time
Off to www.circulation.com. Thinking back, I didn’t know how I would get here, where I would sleep or what I would eat, but came anyway. Things worked out great toward that end. There was a shuttle that brought people up that I jumped on. Because I am doing many workshops lodging and meals are provided for me. I never have worries about the future, we always find a way. 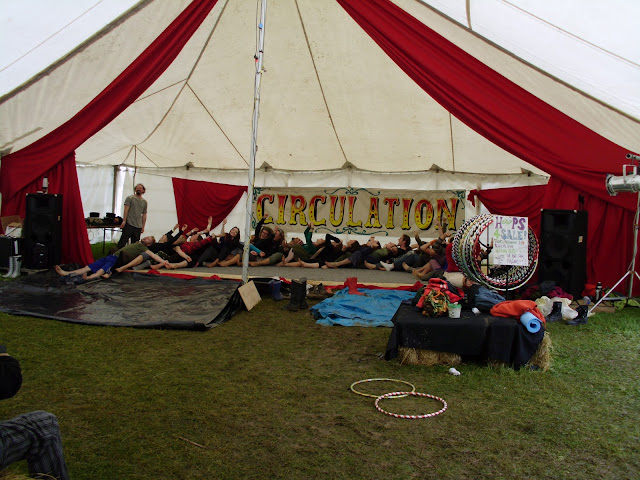 This is a juggling and manipulation convention that takes place in the mountains outside on Dunedin, a wonderful setting, yet rainy on the day I arrived. Specifically it is at
http://www.waiorascoutcamp.co.nz/info/about-waiora
Running Friday through Tuesday, there are some hundreds of people here enjoying. There is no internet connection up here, kind of strange not to have, but like the old days.  They are providing a bed and meals for me, sleeping in one of four rooms in the same building where we eat, on bunks with two others, very comfortable. It’s a nice building, all wood. The meals will be all vegan, a good thing.  Ate a curry vegetable mix on rice last night, quite good. This morning it was an organic seed and oat cereal along with an excellent bread and tea, along with much more. 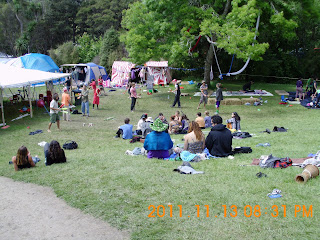 Much of this seems kind of like a hippy gathering, seeing long hair, piercings and tattoos often. Most things occur in a big tent, such as shows and many of the workshops. Speaking of workshops I will be presenting many. At one point there was a hula hoop class going on, many participants.   I saw one women doing hula hoop who had a baby strapped to her chest, she was breast feeding at times while hooping. Hula hooping is very big over here, I saw much hooping in Australia and New Zealand.
On awakening after the first night I heard birds in the trees and saw mist over the valley through the vegetation, a beautiful thing. As usual, I was up with the sun, I slowly and quietly slipped out of the room so I would not wake the two other bunk mates. Was somewhat cold last night, the first night, I will have to find more blankets for tonight. In fact, I’ve been somewhat cold my entire time over here, heaters are seldom used it seems. But, then again, it is now getting into spring so things will start heating up soon. 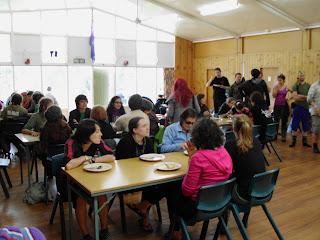 Just had lunch, a very tasty vegetarian meal of rice and assorted vegetables in a delicious sauce, along with beans and a few other things, quite good. After I ate I noticed someone eating alone at a table who was having trouble getting food to his mouth. I thought he had cerebral palsy and went to ask how I could help. Dunkin told me that I could help to feed him. He said that 16 years ago he was involved in an accident that left him in a coma for two and a half months. I told of my similar circumstance, as I showed him my book. He does not have very good control of his muscles and limbs, his left arm does not work so well. His speech was much affected also. After seeing Dunkin I feel so fortunate to be able to do what I can. I noticed that in taking a bite of food he opens his much quite big, I often do the same, not sure why, don’t want to miss the mouth or something. Mary Ellen was much bugged by this when I ate, and by other natural things I do. 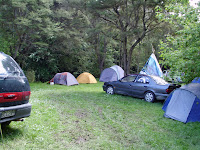 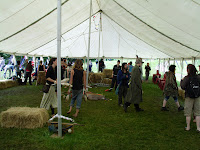 11-15-11  I’ve been busy teaching and working with jugglers, something I enjoy and people seem to get much out of my help—advancement, advancement. This has been quite a splendid event. Hidden away in the mountains in NZ with a bunch a jugglers and manipulators, very nice. I’ve taken many photos, which I will be sending separately. 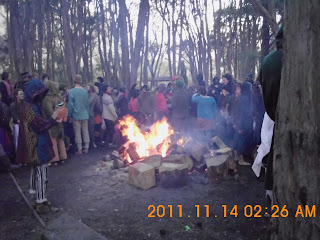 Last night, the last night for circulation, there was a traditional Maori dinner. It was out in the woods with the trees, food was prepared underground on hot rocks where there was a fire earlier. First a hold is dug, rocks put in and a fire brought up very big. Hot coals are developed under the fire, food is put on wrapped in tin foil, and the whole thing is covered in dirt again. The meal and gathering was called Hangi. As usual while here, I ate too much, again. The food that is made is all vegan (no animal products in them at all) and all has tasted excellent. I believe that is a next path for me, a vegan life-style. I’ve just seen such harsh videos of the treatment of the animals we consume. And, even milk products from cows, I saw a documentary about how, in milk, they can’t help but include some cow blood and puss, a terrible thing. Also, I heard that the human body was not evolved to eat meat, we should be on a plant based diet to live best. 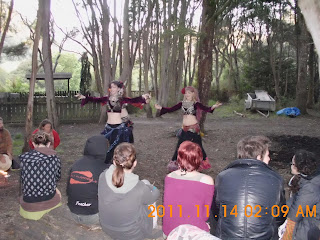